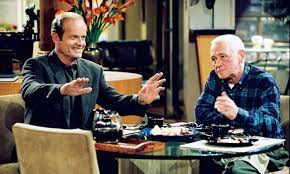 Posted at 17:51h in Reviews by TiffanAdmin 0 Comments
0 Likes

Looking good is an essential part of being a media personality, even if you’re on the radio. One of the most prominent exponents of always looking smart was that of Doctor Frasier Crane. With the exception of about 4 times during his long running TV series  the man was never seen in anything other than an immaculately turned out suit or smart casual clothing. A jeans and T-shirt guy Frasier was not. He comes back to his home city of Seattle after a turbulent, but not unrewarding time, in Boston and a famous bar called Cheers. He is divorced from the cold, slightly masculine, but secretly passionate Lillith, who he gets back with for a time following one of the best lines in the show. Lilith “Oh Frasier, you’re the only man I’ve ever loved!” Frasier “Oh Lillith, so are you!”,  and misses his son Frederick. 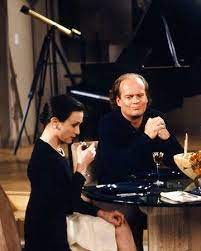 He also has to come back to the city to take care of his Father. Forced out of the police after being shot in the hip, Martin Crane is the totally opposite of his Son. Frasier likes opera, classic music and sherry. He has a taste for the finer things in life. Martin likes Beer, sports plus Steak and mashed potatoes with all the “fixins”. He hates the fact he has to live with his son in his swanky apartment. However, the two slowly begin to bond and come closer together in ways that they never thought possible.

To look as good as Frasier, or even follow Martin’s more casual style, go to Designer menswear Ireland based firm, EJ Menswear’s website.